Keeping an eye on our properties 24/7, to ensure the safety of our households is very important. Thanks to the Wi-Fi security cameras for helping us. But what if you went to a location, where there is no internet connection? Of course, you can use such old fashion tools as a compact binocular. But in case your genius neighbor wants to hack into your security system, you may need special cameras that are safer and more practical. In this review, we have collected the best portable security cameras without WiFi for you, among which you can find the best option.

The list of the other excellent portable security cameras without WiF with a comparison of the main characteristics: 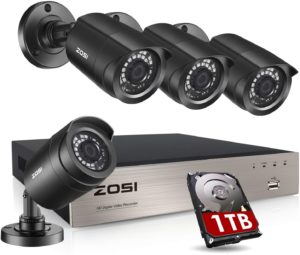 This is a bullet camera for building a low-budget video surveillance system.

Compared with the capabilities of comparable solutions of the previous generation, this model provides a more legible picture in low light conditions of the controlled area.

At the heart of this advantage is an EXIR backlight with a single high power LED and a rectangular lens. The model supports a standard set of image enhancement technologies.

It allows you to the bitrate by specifying an area of special attention.

Besides, this model generates two video streams to reduce the load on the data channel. It is able to pair with a wide range of recorders, as well as with the company’s proprietary cloud service. 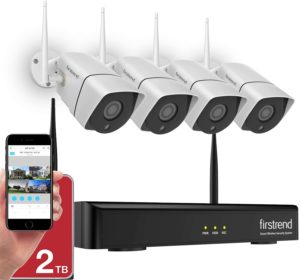 Further in our rating is an inexpensive dome type camera for video surveillance. It is nice that most of the important “chips” this model supports.

In particular, the extended dynamic range and a modern version of noise reduction technology, work with the sign of the area of increased interest.

It significantly reduces the volume of the archive. There is also motion detection and anti-sabotage, receiving power over twisted pair. It also boasts a built-in backlight EXIR.

Recall that the latter differs from the classic infrared, the uniform rectangular illumination of the controlled area. Without a bright spot in the center and dark corners. The camera can be equipped with lenses with focal lengths of 2.8, 4, or 6 mm.

The desire for remote access to your CCTV system is understandable. As well as the unwillingness to spend significant amounts of money to install this functionality.

Now almost every manufacturer or assembler provides cloud storage and analytics services. But for some reason, there is no special trust in Chinese servers.

At least, to the longevity of such a service and its confidentiality. In this sense, we think it’s better to trust trusted manufacturers. This company is one of the noteworthy options.

All the more so because many of its surveillance cameras are on the XM platform. In other words, they are compatible with any ONVIF recorder, can be managed from the local network as well as through the XMEye application, and are also inexpensive. This model with a varifocal lens will cost your budget twice as cheap as the famous “competitors”. 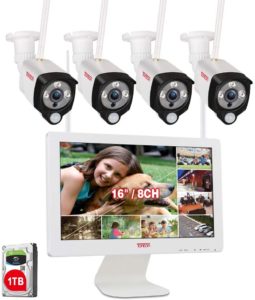 The high resolution of the CCTV camera does not yet guarantee that it will be able to shoot well in low light conditions.

Thus, the quality of the picture obtained in this mode of operation directly depends on the physical size of the installed sensor.

This model has attracted attention with a very large sensor that provides a decent light sensitivity. All the more in combination with such a high-aperture optics.

When creating new generation lenses, special low-dispersion glass is used. It practically eliminates the possibility of graphic artifacts. All this together allows this camera to successfully shoot in color even at night.

According to experts, the full benefits of this range will prove themselves in video surveillance systems, in which the human factor plays an important role. 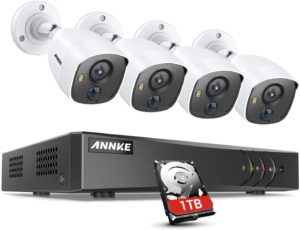 Universal models allow you to reduce the number of CCTV cameras used to a reasonable minimum. Such as this model.

This camera has a high-speed swivel mechanism, controlled manually and automatically by the operator. In the latter case, 300 camera positions are programmed or any of the eight preset patrol routes are selected.

Moreover, the camera in question comes with a lens with an adjustable focal length.

This allows you to scale the resulting picture in a very wide range. 4x optical zoom and 16x digital zoom are available. There are also good video analysis capabilities, three streams, and a high frame rate. 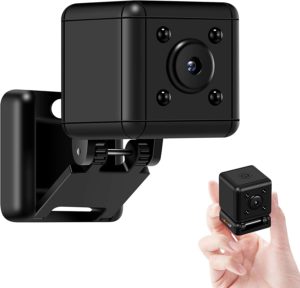 Next in our rating is a quality universal camera for professional indoor video surveillance systems.

The manufacturer guarantees its ability to capture movement, recognize objects, and identify people. In contrast to the above street model, this one has infrared backlighting and a built-in microphone, so it is more expensive.

The features are almost similar, including good video analytics (optional) and the ability to scale the picture in a really wide range.

This camera is supported by all mobile platforms, can write to a memory card, and get power over twisted pair. By the way, the latter is useful not only for reducing the total number of wires, but also to simplify the remote “restart”. 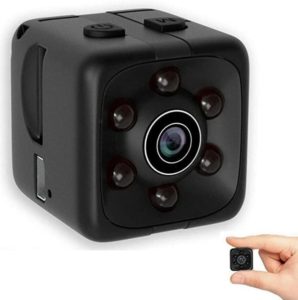 The feature of this miniature IP camera is the presence of a PIR-sensor that allows you to capture heat radiation. Recording such an event can serve as a command to start recording.

It is noteworthy that this model also has a separate alarm input/output. This is a rather rare feature in the budget segment of CCTV systems.

Despite its modest size, the recommended camera comes with a full audio channel, i.e. a microphone and a speaker. Almost all modern image quality improvement technologies are supported.

It is possible to specify an area of increased attention to save traffic. In a small case, there is even room for a mechanical IR filter with an auto switch.

The device can receive power over twisted pair, is ready to write information to the memory card and transfer it wirelessly.

You may also like: Best Portable Generators for Camping 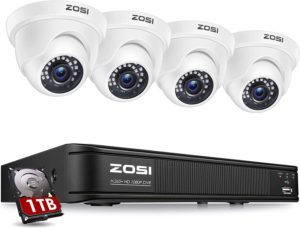 Only fisheye class models allow you to cover a large area with a single CCTV camera. This is possible due to the extremely small focal length of the lens.

A side effect of this manifests itself in the form of distortion, which is a barrel-shaped distortion of the shape.

The recommended panoramic model is interesting by the modern wireless module, which can be important in conditions of high 2.4 GHz band load, the ability to send sound in both directions, as well as excellent integration with the manufacturer’s proprietary cloud service.

As a peculiar feature, we can consider the ability of the accompanying software to divide the picture into segments and partially compensate for its curvature. 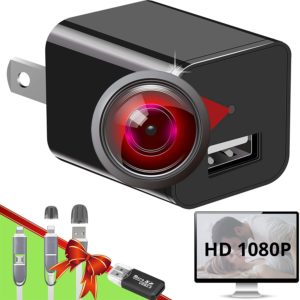 If the budget for a video surveillance system is small and there will be no serious requirements for analytics “on the spot”, it makes sense to pay attention to this model.

The second reason to give it preference is the need for minimal delay in signal passing. Moreover, the leading manufacturers have been offering 5 and 8-megapixel models of such cameras for a long time.

So everything is already fine with the detailed picture. In this sense, the recommended device can boast “just” 2 MP sensor, but for most typical tasks, the resolution of the latter is enough.

This camera can be powered by coaxial, its light sensitivity is quite decent and it can do double scanning of the control area. The backlight is not very powerful, but relatively uniform and can change the intensity of the light flux adaptively. 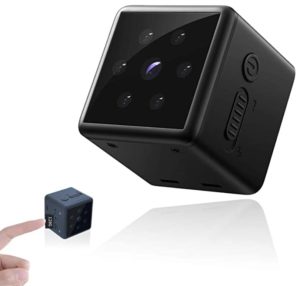 We already mentioned above that there are devices among analog models that can capture the controlled area with increased clarity.

On the example of this model, you should pay attention to the format options of the resulting picture. Advanced digital cameras have a special corridor mode.

It allows you to change the aspect ratio programmatically. This is important for minimization of traffic when taking pictures in “narrow” places.

For their analog relatives, the easiest way to initially buy a 4:3 device will be to take pictures. It is also possible to reduce dead zones by using rotary dome models. But the expediency of buying more expensive cameras to solve highly specialized tasks seems doubtful to us.

Especially since modern 5-megapixel cameras have a wider dynamic range and more versatility in terms of supported standards.

You may also like: Best Portable Dual Hose Air Conditioners 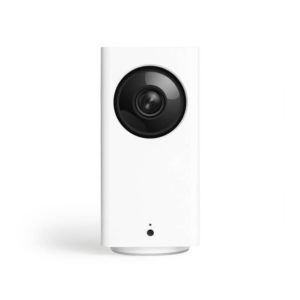 This model complements the list of good CCTV camera models for outdoor use.

The gadget has received high-quality intelligent IR illumination with the ability to adjust the gadget in total darkness.

Option Smart IR allows you to adjust the intensity of radiation to achieve the best performance in the field in total darkness.

Besides, a wide dynamic range is achieved due to WDR technology.

Moreover, the developers have equipped the model with an intelligent video recording system IVS. With its help, you can detect faces for identification.

Which is a better analog or IP camera?

Frame rate and image quality: The frame rate of analog cameras is lower than that of IP, so they’re not ideal for areas that have a lot of motion or that need to be seen in high detail. More cables: You need a power cable, plus a DVR cable, whereas you only need one cable with IP cameras.

Can I install security cameras myself?

If you can do it on your own, it’s pretty much free after you pay for the equipment. Most cameras these days are not only easy to install on your own, but also designed to be as pain-free as possible. Some you can set on a table, stick with adhesive on a wall, or attach to a wall with a drill.

Can IP cameras work without Internet?

How do you power a wireless security camera?

What are the advantages of IP cameras?

IP security cameras send their signal over a network, allowing greater information transfer than an analog signal sent to a DVR. What are the biggest advantages? Whether cabled or wireless, CCTV systems that use an IP system have multiple advantages. They can record at a higher resolution.